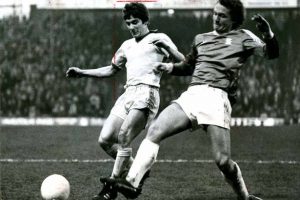 Former Everton midfielder Mick Buckley has died at the age of 59.

Buckley, who played 158 times for the Blues, scoring 12 goals, passed away after a long illness.

An England youth international, the Manchester-born player came through the ranks at Everton and made his first-team debut in a 2-2 draw against Wolverhampton Wanderers at Goodison Park in March 1972.

He scored his first goal two weeks later – netting the only goal of the game against Southampton at Goodison.

His last appearance for the club was the iconic afternoon in May 1978 when Everton defeated Chelsea 6-0 with Bob Latchford getting the two goals he needed to reach 30 in the First Division for that season.

Buckley moved to Sunderland that summer and later had spells at Hartlepool, Carlisle United and Middlesbrough.

Later in life, he fell on hard times and had a long-standing battle with alcoholism