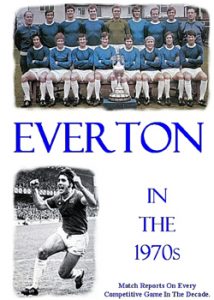 Everton Former Players’ Foundation are pleased to invite you to dowload Tim Jepson’s Kindle ebook Everton in the 1970s. Tim has kindly donated all proceeds from the ebook to the Foundation.

The book covers the whole of the 1970s from the F.A. Cup away defeat at Sheffield United on 3rd January 1970 until the last game of the decade the 1-1 home draw to Derby County on 29th December 1979

In the last paragraph of the books introduction Tim writes the following:

‘I said at the beginning of this introduction that writing this book has been a labour of love, a love of Everton and the players who represented the club. Without the efforts of those players there wouldn’t be a book to write and so, for that reason, all royalties due to me are to be paid to the Everton Former Players’ Foundation.’
Tim Jepson
January 2012

The Everton Former Players’ Foundation would like to thank Tim for his kind offer and congratulate him on producing such a fine ebook about Everton.